Fifty years ago, composer/pianist Anton Carlos Jobim and vocalist/guitarist João Gilberto convened at A&R Studios in New York and tenorman Stan Getz to create the definitive recording of “The Girl From Ipanema.” It was not the first recording of the song, 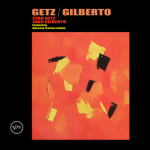 which has already seen success in Brazil as “Garota de Ipanema,” sung by Pery Ribeiro. Nor was it, by any means the last—according to Performing Songwriter magazine, it is the second most recorded pop tune in history. The All Music Guide lists 3,600 versions, by artists such as Lou Rawls, Charles Mingus, Kenny G, Amy Winehouse, Placido Domingo, Erroll Garner and Cher. (Don’t miss this brilliant rendition by Archie Shepp.)

recording dwarfs all others. The album won multiple Grammy awards including Album of the Year, and the “Girl from Ipanema” track won the award for Record of the Year in 1965—the first time ever for a jazz album, and the only time up until Herbie Hancock won it in 2008. (The competition was stiff, too. The other nominees included Louis Armstrong’s “Hello Dolly” and the Beatles’ “I Want To Hold Your Hand”.) The recording quickly worked its way into the ears and the hearts of all America.

So why do jazz musicians hate “The Girl From Ipanema” so much?!?

I’m guessing the reasons are, in more or less this order:

Of those three reasons the song can’t be blamed for the last two—only for its corniness. And for me the corniness isn’t at all a part of the original song—just of the English version that Astrud Gilberto sings on the recording… and thousands of other English language versions that have followed.

When Norman Gimbel wrote the English lyric he changed the rhythm of the original melody and, in my opinion, ruined it. Which is not to say that anyone could have done much better, putting to English a melody that is so perfectly suited to the sensuous cadences of Brazilian Portuguese. (Conversely, how do you think “I Want to Hold Your Hand” would sound in Portuguese?)

Listen to João Gilberto’s rendition of the Portuguese melody at 0:08, and compare it with his wife Astrud’s English rendition at 1:22.

After the curvaceous, lilting rhythm of the Portuguese, the English version comes off as flat-footed and cloying. Here are the beginnings of the two versions notated musically:

I’ve indicated the phrases with horizontal arrows, and the emphasis at the beginning of each new phrase with a vertical arrow. Notice how the Portuguese version cascades across the bar lines, whereas the English version falls squarely inside them.

For me, the effect is compounded by Astrud Gilberto’s iffy pitch and sing-songy delivery. (About Astrud: she had no professional experience; she came to the studio that day only as João Gilberto’s wife. But they decided to do an English language version, and she was selected to sing because of all the Brazilians she was the only one who spoke English.)

There may be musicians who dislike the song for reasons unrelated to the English version. But I’m guessing most just haven’t really looked beyond it. For me, the track has all the makings of greatness: a brilliant composition by one of the greatest popular songwriters of all time… guitar and (male) vocals by the supreme master of intimate delivery… a gorgeous, sensuous saxophone solo by one of the most melodic sax players in the history of jazz… and perfect chemistry tying them all together. I’d gladly lose the English version in the middle of the song, but The American public didn’t seem to mind it one bit. After all, it told a sexy story with a timeless plot, in a language they could understand. And we have to keep in mind that this is the same American public that made “Raindrops Keep Fallin’ on my Head” a huge number one hit a few years later.

In any case, I think the genius that those musicians captured in the studio fifty years ago far outweighs the song’s faults, and I’m delighted to be able to play the song now and then. For musicians who can’t get to that place, my advice is: listen to João’s version until you can easily summon it in your head, in place of all the others that might be haunting you. Instrumentalists can play the original rhythm and phrasing rather than the English language version, to produce a much hipper song. Vocalists, I’m afraid, will have to learn the Portuguese. But what a beautiful language to train yourself to sing!

Leave a Reply to Craig

I'm proud to announce that the Random Roots app is now available on the App Store for iPhone/iPad. It's the culmination of a year's work, and it's a game changer for players looking to deepen their musicianship and increase the efficiency and effectiveness of their practice.

I'm proud to announce that the Random Roots app is now available on the App Store for iPhone/iPad. It's the culmination of a year's work, and it's a game changer for players looking to deepen their musicianship and increase the efficiency and effectiveness of their practice.