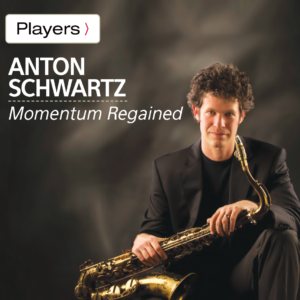 On Anton Schwartz’s 2006 album, Radiant Blue, the tenor saxophonist’s strong melodic themes and driving rhythms recalled early ’60s Blue Note records. The album hit No. 4 on the national radio charts, and the Bay Area bandleader seemed poised for even greater success. Then, it took nearly eight years for him to release the follow-up, this year’s flashMob.

Schwartz blames his record company. He accuses the label of getting distracted by other projects and allowing his momentum to get sidetracked. He knows because he runs the company, which he calls AntonJazz.

“When a release gets going, it monopolizes all my time,” Schwartz explains. “And I didn’t have the time to spare. I was dealing with aging parents in New York, getting married and moving to Seattle. I was afraid of losing momentum, sure, but parents and marriage are more important.”

For flashMob, Schwartz brought back three-fifths of the Radiant Blue lineup: himself, pianist Taylor Eigsti and bassist John Shifflett. The leader replaced drummer Tim Bulkley with Lorca Hart and guitarist Peter Bernstein with trumpeter Dominick Farinacci. Schwartz had done a lot of writing during his eight-year recording hiatus, and when he looked over the material, he realized that the strongest group of tunes had been composed for trumpet and tenor sax.
“I had been checking Dominick out for quite a while,” Schwartz reveals. “But I never met him till we played the night before the recording. His tone on the instrument is incredibly full, and it’s so much fun to blend with that as a tenor player. He’s got fire to his playing. He’s got the Miles Davis thing down. He has an overriding sense of melody. It’s clear when he’s playing that his mental process is not, ‘Which of my tricks should I use next?’ It’s, ‘Where is this music leading, and how can I help it get there?’”

Eigsti describes Schwartz as “extremely melody-driven,” noting that the saxophonist “has a great way of communicating with the audience.”

“I don’t know an alternative to emphasizing melody,” Schwartz says. “The most fundamental question one can ask of any music is, ‘Why was it created?’ You can answer that by saying, ‘to break with tradition,’ ‘to reference tradition’ or ‘to show the socioeconomic hypocrisy of society’—and those are all valid answers. I’m writing for the sake of pure enjoyment and pleasure—for the listeners and the players—and that starts with melody.”

As a teenager in Manhattan, Schwartz studied with Warne Marsh and then with Eddie Daniels. He also devoured the music of Joe Henderson, Gene Ammons and Stanley Turrentine. But just as influential, Schwartz insists, were records by Ray Charles, Stevie Wonder and Earth, Wind & Fire. On flashMob, Schwartz plays Kenny Dorham’s “La Mesha” and Thelonious Monk’s “Epistrophy.” On earlier albums he covered tunes by Wayne Shorter, Benny Golson and Sonny Rollins.

“All these artists had a lot in common,” Schwartz says. “Not only did they have strong melodies and an incredible groove, but their tunes had an emotional arc. They give you one message, then they move on to something else; they don’t stay in one place. I don’t want to be in a stationary position that a listener can check in at any point and know what they’ll get. I want to embark on a journey and take the listener along.”