Other than Mixolydian, these are the four most commonly used scales over dominant chords. (The term is not widespread, but let’s call a scale used over a dominant chord a “dominant scale.”) Observe that the four scales all have four notes in common: the root, major third and minor seventh (which are essential to all dominant scales) and the tritone. If we look at the following figure, in the key of C, we see that the four common notes create four intervals—two whole steps and two major thirds:

We can generate any of our four dominant scales by adding notes to this skeleton of four notes. Specifically, we add notes that subdivide the major third intervals into smaller intervals.

Going back to our four-note skeleton, if we fill our two major third intervals “sparsely,” we add just two notes, yielding a six-note scale, the whole tone scale:

Alternatively, if we fill in our major third intervals “desnsely,” we add four notes giving us an eight-note scale, the half-whole diminished scale:

So far, here’s what we’ve got: If we think of a dominant scale as having a bottom half and a top half, we have two ways of populating each half with notes: a sparse way (3 notes total) and a dense way (4 notes total). A whole tone scale has a sparse bottom and a sparse top, giving us a (3+3=6) six-note scale. A diminished scale has a dense bottom and a dense top, giving us a (4+4=8) eight-note scale.

So… What if we combine a dense bottom (4 notes) and a sparse top (3 notes)? That gives us the bottom-heavy 7-note altered dominant scale:

And a sparse bottom (3 notes) with a dense top (4 notes) gives us the top-heavy 7-note Lydian dominant scale:

By the same reasoning, we could call the Lydian dominant scale the “whole tone diminished scale”… thought I’ve never actually heard that:

In these last two diagrams I’ve included the scale going not only up to the (redundant) high C, but also to down past C to the low B, so as to show the full extent of the portions of the scale that come from a diminished scale and a whole tone scale.

Perhaps a better way to visualize this effect is to arrange the notes wrapping around in a circle. It gives us better sense of the continuity of notes in the scale as they move past the octave boundary and, in this case, of the overlap of the diminished and whole tone portions of the scale. First, here are the C diminished and whole tone scales represented as a circle: 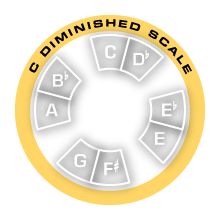 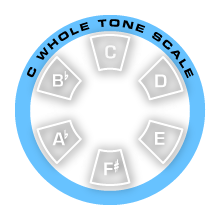 Now, here is the C altered scale, with the sections that come from the diminished and whole tone scales indicated: 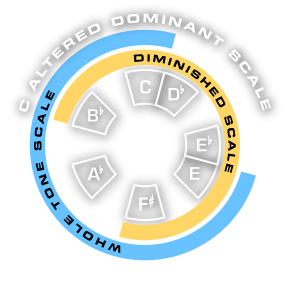 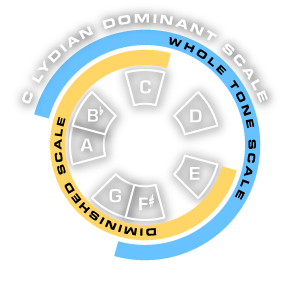 Note, once again, the sparse (blue) and dense (yellow) areas of the two scales.

The tritone substitution of altered is lydian dominant and vice versa.

You may have heard about the tritone substitution: the idea is that if you place one dominant chord over a root a tritone away, the resulting chord is also a dominant chord. That’s because the third of the new chord is the seventh of the original chord, and vice versa. Well, for the four scales we are discussing, we can take this notion further…

Any two keys a tritone apart have identical four-note skeletons because the root, third, tritone and seventh of one are, respectively, the tritone, seventh, root and third of the other: 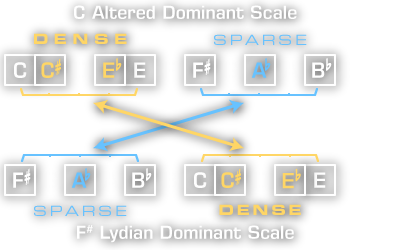 The act of swapping the top and bottom, when we look at it on the chromatic wheel, amounts to a 180° rotation. Looking at the circular representations of the altered and Lydian dominant scales, above, it’s easy to see that rotating either one a half-turn turns it into the other.

Since the top and bottom halves are the same for each of the two scales (for diminished both are dense; for whole tone both are sparse), reversing the two halves yields no change for either. Equivalently, spinning the wheel representation of either the diminished scale or the whole-tone scale 180° has no effect on the scale; they are “radially symmetrical.” (Which is why people use the terms “symmetric diminished” and occasionally “symmetric augmented.”)

…they are not the only scales made up a diminished part and a whole tone; all the melodic minor modes share that property: 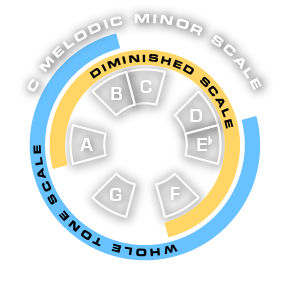 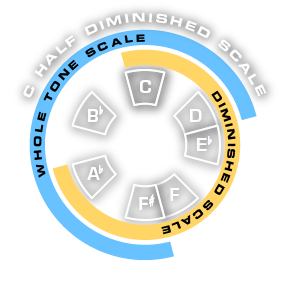 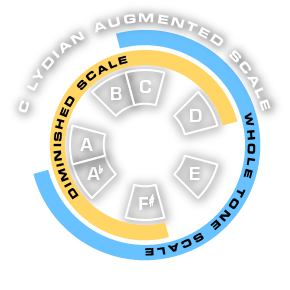 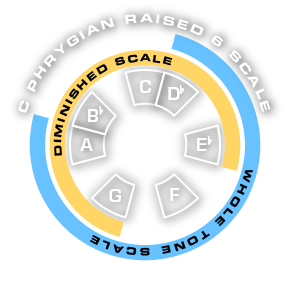 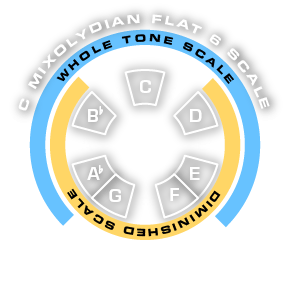