NEWS: I have created a practice-aid app for iPhone/iPad that implements all the concepts in this post! To learn more and try it for free, visit randomroots.app

As jazz musicians, we all know how important it is to practice things in every key. It is, indeed, useful to play passages written out in every key. But it is of far greater benefit to internalize a passage and practice executing it in all twelve keys without reading.

Here’s a tool to help you do that. A printed sheet. I’ll go into details below, but the concept is very simple: take an idea (a scale, a chord voicing, etc.) and go across the rows of the sheet playing the idea in each key you see. 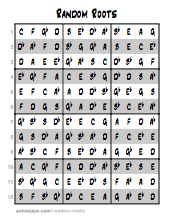 And separate versions for B and E instruments: 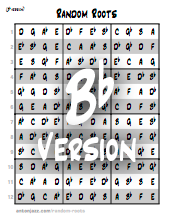 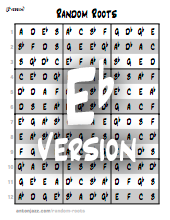 Why do we need this? Why not go through every key chromatically, or through the circle of fifths?

There are four simple ways to go through every key: chromatically upward, chromatically downward, up fourths (down fifths), and down fourths (up fifths).

If what you’re practicing is an entire song or a long passage, then any of these ways is fine; you can ignore this post.

But for practicing shorter things—which is especially important for beginning and intermediate players—there’s an interesting predicament: when you move through the keys either chromatically or in the circle of fifths it’s difficult not to “game the system,” and that interferes with learning the task at hand. Let me explain:

Suppose your aim is to learn a piano voicing in all twelve keys. If you move chromatically upward then each note of a chord you play is simply a half step above the corresponding note of the previous chord. This allows each finger to simply “crawl up” the keyboard from one chord to the next, to the next. Each previous chord provides a huge hint for the next, and all those hints hamper learning. The same is true for chromatically downward.

Likewise, moving through the keys according to the circle of fifths has its own problems. Here the process of moving from one chord to the next is artificially simplified by the fact that the black-key/white-key patterns that the chord voicings make change very slowly as you move in fourths or fifths: often they are identical from one chord to the next; when they differ, rarely is it by more than one note. It becomes possible to keep your hands in more or less the same position and just move your arms back and forth from one chord to the next, with occasional adjustments. This shortcut is harmful, because it is not available when you’re actually playing a song.

If your aim is, say, to learn scale degrees in the different keys (see below), then the situation is even worse. Consider the task of playing the major sixth in each key. If the keys you test yourself on are moving chromatically, then the exercise requires only starting on the right note and playing the chromatic scale. Apart from that first note, it requires no knowledge at all of major sixths! Likewise, if the roots move in fifths then the exercise requires only playing the circle of fifths.

Why do I need a separate version pitched in B or E?
Why can’t everyone use the original version?

You’re right—any of the sheets could work just fine for any instrument!
I’ve included the transposed parts so that players with transposing instruments (B trumpet, E alto sax, etc.) can play exercises together in unison.
Playing with others can be good for motivation… and it also provides a self-check feature that you don’t get when you play alone: If you play an exercise with others then you should all be playing the same things in unison. If you hear anything else, then you know one of you has made a mistake.

Should I start at the top and go through all the roots until I get to the bottom?

I suggest a row at a time, doing however many rows you feel you need. You can start at any row. In theory, if you practiced just the first row over and over you might memorize it. In practice, that’s not likely to happen for a long time, but by mixing up the rows you get to practice the roots in different sequences, with different intervalic jumps, which is good for the ears and a good way to make sure you know all the answers “from every angle.”

What’s with the stripes and stuff?

Why does the sheet have D and G, never C and F?

We have to write B, E and A anyhow, so we write all accidentals as flats for the sake of consistency. If D and G are unfamiliar to you, I’m sorry. Or perhaps “you’re welcome” since maybe it’s time you became familiar with them! :)

Are these root sequences really random?

Actually they are not. A sheet of randomly chosen roots would contain lots of repeated roots (who needs to see one A chord immediately following another?!), and some roots would occur more frequently than others. These sheets are special in the following regards:

Ok, so what should I practice using this sheet?

So glad you asked! Here are some suggestions…

Learn to be able to play, in tempo, any scale degree relative to any key.
For instance, be able to play the answers to: “What is the major third of E?… the major second of A?… the minor sixth of B?”
The random root sheet will supply all the keys, so quiz yourself on one scale degree at a time, using the sheet.
Here is what you do:

Here’s a good sequence for testing yourself:

Choose a phrase you wish to integrate into your improvisation vocabulary and practice it in each key using the same techniques described above.
It could be a simple major phrase:

or a more complex one:

This is especially useful if you play sax, trumpet, clarinet, or any instrument not pitched in C… but could also be good for, say, accompanists.

Putting the Above Exercises in Context

You can supplement any of the exercises listed above by playing the root simultaneously, pitched low on your instrument. That lets you hear the relationship between the root and the note or notes you’re practicing, and lets you use your ears to verify the accuracy of what you’re playing—especially for one-note exercises such as scale degrees.

Let me know if you have any questions. Enjoy!

NEWS: I have created a practice-aid app for iPhone/iPad that implements all the concepts in this post! To learn more and try it for free, visit randomroots.app