Even non-musicians know: music has a lot to do with scales. But why? Given the amount of time we spend playing them and talking about them, I’d say it’s a fine question.

A scale has two distinct uses:

We can call the first use “melodic” and the second one “harmonic.” The unfortunate situation is this: all the ways we have for picturing scales are suited to their melodic use, at the expense of their harmony. This post aims to help rectify that.

How do we write a scale?

We always write a scale as a sequence of notes ordered chromatically, in increasing pitch order, starting on the tonic. And when we’re taught how to form a scale, we’re often taught in terms of the intervals between its notes… so that a C major scale is written as

where W and H are whole and half steps.

What do these ways have in common? We’re ordering the notes by pitch, focusing on are which notes are higher/lower, and by how much. And, sure enough, that’s very important when we are interested in the shape of the phrases we construct. Listen to the following melody and you’ll see what I mean:

The importance of melody

Do we know this song?


You know the song well. You probably even have a relative who sings it this way 😆. The harmony is completely, painfully wrong, but the melody is clear because of the way the notes move up & down, and how far, in relation to the rhythm. If some of the notes are a semitone off—or all of them!—it doesn’t hurt that shape very much, and the melody is still unmistakable.

But how about harmony?

If do something similar with harmony, the result is unrecognizable. First, listen to the normal chords to the song:


Now, let’s change each chord by moving just one of its notes by a semitone. Here’s the result:


So what’s going on here?

Not so when we’re interested in harmony. Harmonically, two notes a semitone apart clash strongly. So what’s a good way to look at notes that’ll tell us their harmonic similarity, if pitch is so bad?

It’s been starting us in the face

Perfect Fifth: One Note or Two?


Since notes a fifth apart are so harmonically similar, is there a way of organizing all the notes such that ones a fifth a part are right near each other? Of course. It’s our friend the circle of fifths:

Most of us know it from talking about keys and key signatures. But for harmonic purposes, it offers a way for us to look at the notes in a scale that can’t be beat.

Look at a scale’s notes on the circle of fifths

If we’re looking to know what sound a scale conveys, let’s look at them on the circle of fifths, with the root of the scale positioned at the top. For instance, if we outline a scale’s notes in red and indicate its root with a white double-outline, a C major pentatonic scale looks like this:

We see immediately that, in contrast to chromatic ordering—in which the notes are spaced haphazardly throughout the octave—on the circle of fifths the notes are all clustered together. What’s more, we see that they are all clockwise of the root. That’s because it’s a major pentatonic scale, and all the notes on the right side of the circle are the bright “major” ones: the 5, 2, 6, 3, 7 and +4 of C, respectively. Going counterclockwise from C we encounter all the dark “minor” ones: the 4, ♭7, ♭3, ♭6, ♭2 and ♭5 respectively. (See this post on Harmonic Brightness & Darkness.) No surprise, then, that if we look at the minor pentatonic scale, we see that it is simply the major pentatonic shifted counterclockwise, in the dark direction: 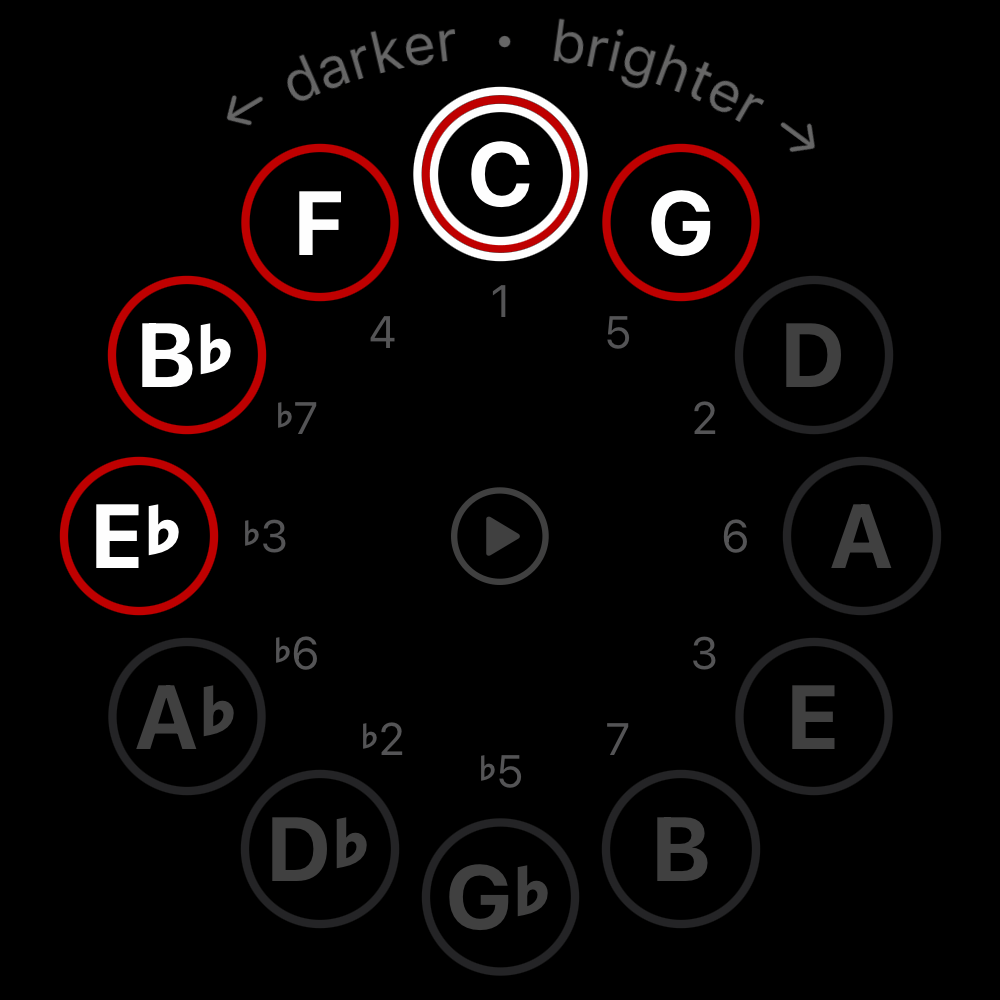 Returning to the major pentatonic, notice that if we add one note (B) on the bright side and one note (F) on the dark side, the result is a scale of seven notes that are all adjacent on the circle of fifths—namely, the major scale: 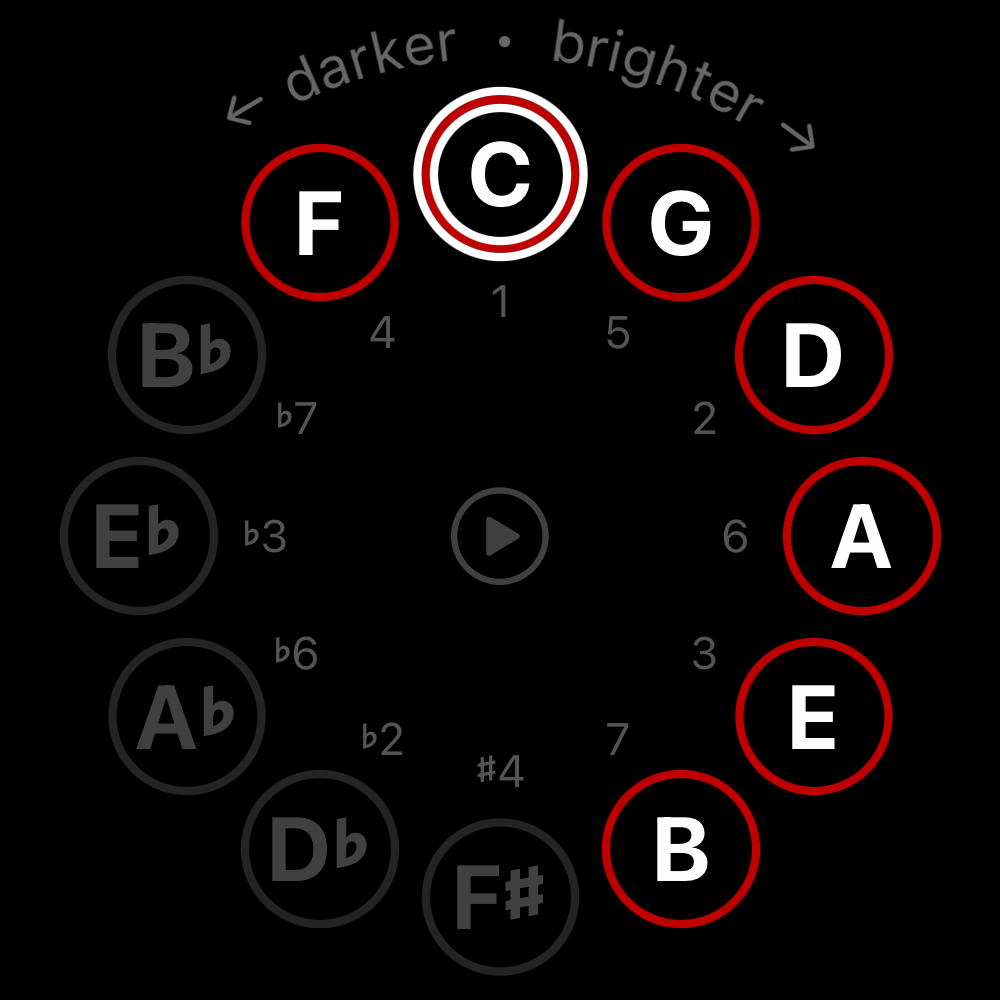 The act of rotating the notes of a scale on the circle, in one direction or the other, so as to put different roots at the top, is the act of taking the modes of that scale. If we rotate C major one “notch” in the bright, clockwise direction, we get the Lydian scale, the brightest of all the major modes: 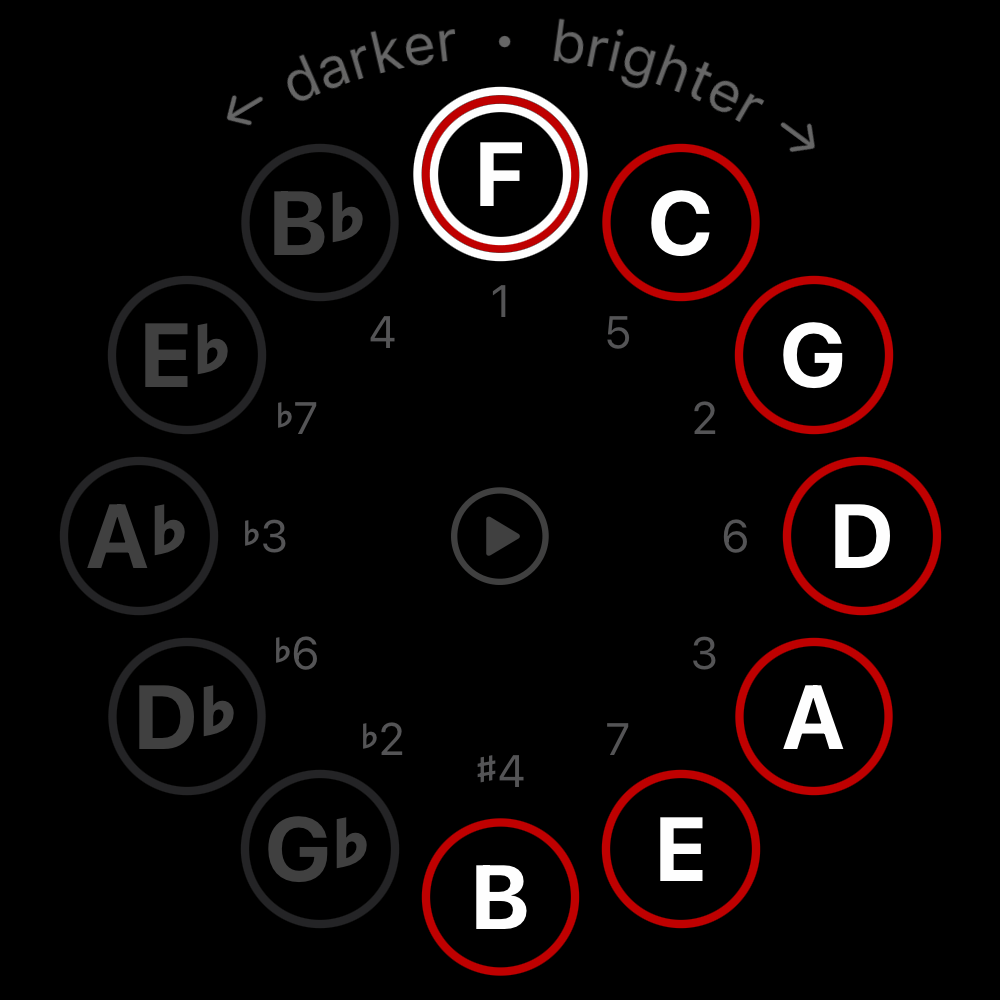 And if we rotate in the opposite direction, we successively generate all of the darker modes of the scale, from Mixolydian and Dorian all the way through to Locrian: 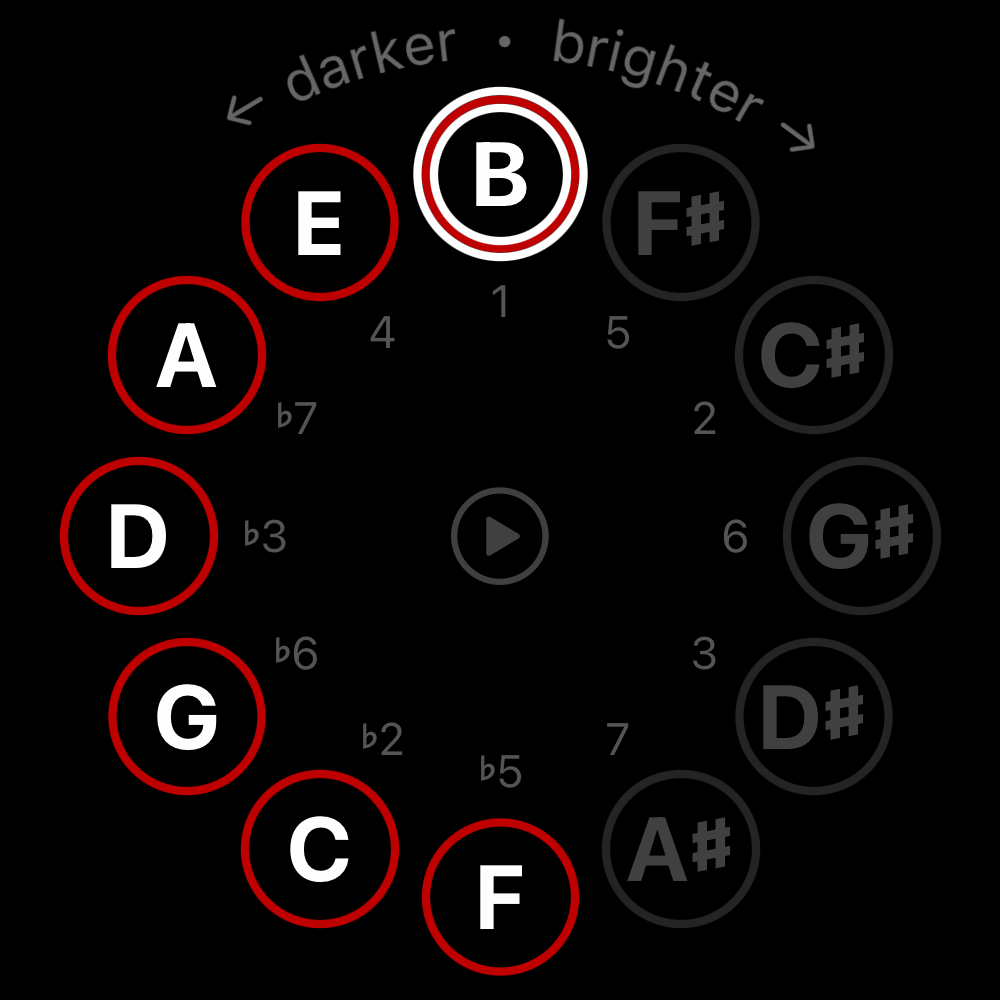 A look at a chromatic scale (with root placed at the far left) reveals that as pitch increases, the harmonic quality of each note with respect to the root fluctuates somewhat erratically between dark (blue) and bright (green), and between consonant and dissonant:

Similarly, on the circle of fifths, each of the harmonic roles has its own fixed location:

But now there’s great logic in the arrangement, with the notes growing steadily brighter/darker as one goes progressively clockwise/counterclockwise. Distance on the circle of fifths is connected with dissonance—with the notes at 0° and ±30° being the perfect intervals, and the notes at ±150° and 180° being the dissonant semitone and tritone.

Go learn on your own.

There’s much more to be said on the subject, but I suggest you explore the terrain yourself. Have a look at these scales on the circle of fifths:

An app helps you explore 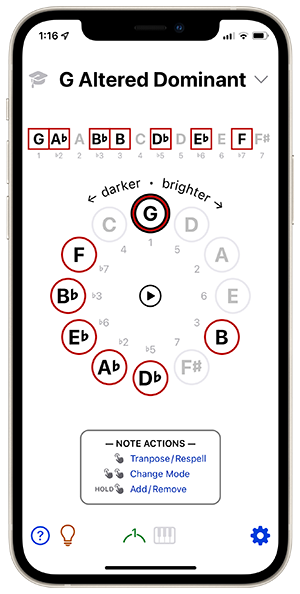 If you’re an iPhone/iPad user, I’ve created an interactive app called ScaleMate that shows scales in both linear and circle of fifths arrangement and lets you modify them and hear the results—played both as scales and as random melodies. It also lets you learn about dozens of scales—from built-in explanations that I’ve written, which serve as an extensive, interactive theory reference.

I hope you enjoy looking as scales this way. The nice thing is that harmony doesn’t presuppose that the notes have to be listed in any order… you can just take them in all at once by looking at the diagram. And I’ve found no better way of looking at scales for thinking about their “sound” than the circle of fifths view. Not by a long shot. Let me know what you think—I’d love to hear your comments!

Interested in more? In addition to checking out the ScaleMate App, these posts discuss similar subjects. You might find them interesting: